Recorder, pibes, whistles, flutes, shawm, lur
As an instumentalist, the recorder and all similar woodwinds are HC’s forté. He started playing woodwinds at a very early age and had individual education for the recorder all through the school years, and also a few years of playing clarinet, piano and other instruments. He has played the recorder in several classical ensembles and both the recorder and a lot of different woodwinds in folk bands.

Sample music // HC playing the recorder in a suite of renaissance dances:

First tenor / classical & folk / solist & lead vocalist
HC’s first job as a musician was as a tenor in the practice choir at the Royal Academy of Music during his studies. Since then he has had a long career as a singer and classical solist in chamber choirs and church choirs. Besides the many years of training in the various classical choirs, he has received vocalist and singing education by Jette Rosendal, classical soprano.

Sample music // HC playing the recorder and singing the lead in a sephardic folk song:

Frame drum, landsknecht drum, tabor drum, bells
HCs career as a percussionist began when he started playing medieval folk music with the band Lurpakket in 2006. It started with the davul and various medieval drums and bells, but since the forming of the band Almune in 2015, he has focused especially on the frame drum. But when a louder sound of the drum is needed, the landsknecht drum does the trick.

JOTUN REVOLUTION : My newest project is where I compose my own music with my fellow composer Christine Kammerer (from the band Gjaldulei. Singer, lyre player, pianist).

Jotun Revolution create songs and tales inspired by folklore and an animistic view of the world. We find inspiration in nature as well as in books on Danish/Nordic folklore. That means packing a bag, going deep into the forest and spending several hours among the trees; sitting on an empty beach letting the sound of the waves guide our voices and instruments; or walking in the hills (yes, we do have hills in Denmark), enjoying the view and talking to the birds and animals, we meet.

All we have to do is listen. The songs and wisdom are out there, waiting to be gathered. Longing to be told. Songs that transcend time and space.

ALMUNE : I started playing with Troels and Molly – the two musicians to the left of me in the picture – in the medieval band Lurpakket in 2006. When that band split up, we continued playing for a couple of years as a trio. But it really kicked off again in 2015 when we started playing with Christian and formed the new medieval folk band Almune. Since then we have released two full albums and have played a host of concerts and been part of a lot of different projects, including TV productions.

GJALDULEI : It is essentially impossible to play Viking music, because we have absolutely no original music from the period. But we know quite a bit about the instruments from that time, and there’s been a lot of research done on how the music might have sounded and how it was used in daily life and for ritual practices. That is exactly what we dig into in Gjaldulei, a band that started playing concerts in 2018 and released it’s first album in 2019.

MUSICANTIGA : The musicians playing in the two bands Almune and Götterfunken have played together in several diffent music projects over the years. The name Musicantiga has become the band name, we often use whenever we put a band together with a mix of different musicians, including musicians from other bands. But since Almune & Götterfunken joined forces and released the album “Sommerfugl” in 2018, the name Musicantiga has been synonymous with that constellation of musicians playing renaissance music.

AULOS : I started my own company in 2004. In the beginning I did a lot of graphic design, layout and web site management for both the private and public sector. Now I primarily work with booking and band management for my own bands, and tasks like sound production in my home studio, music distribution & promotion and IT related jobs, including web and graphic design for musicians. 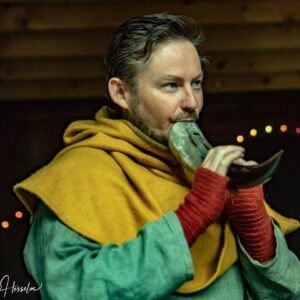